The genesis of the swanky cities of Beijing and Shanghai lies not in the modern marvel of construction technology, but in the ancient practice sessions that the Chinese forced on themselves. Mr. Ming Sr. (captured in a photograph later) bode his fellow country men to travel yonder North and ‘build anything you fancy except it should be high, broad, look like a wall, and be approximately 6800 kilometers long’. With this vague guidance, the good folks of China began to acquire and perfect the art of construction… something that would pay dividends 3000 years later in the 20th century.
The legend also has it that Mr. Ming Sr. had another underlying objective in this apparent CSR project… keep the Mongols out. Once the wall was built, the Mongols (then economically not so well off) figured that they could not afford the 45 Yuan entry fee and 80 Yuan ferry up-down fee and decided to leave China alone. Hence the Northern integrity of the great country was safeguarded.
As we made our way to the Wall, we marveled at the expertise that existed in those times. Anticipating that in 3000 year the youth was bound to become really soft and sissy, and especially people from India with desk jobs would have back and knee problems, they took the pains of ensuring that their client solution (i.e. the Wall) had significant upgradability and modular plug points for a cable lift.
What we did not know and realized later was that the day we decided to visit the Great Wall was also the Chinese All-Hands-Meet on the Badaling section of the wall.
Right after we got off the Great Wall back onto the Great Highway back home, we decided to take a halt at the Ming Tombs or the Great And Really Very Deep Ming Tombs With One Zillion Steps Going Down. A very pretty tourist attraction… very well maintained.

Later in the day in Beijing we got to meet with our NGO partner for the first time and they took us out for dinner. We realized that having someone who speaks the local language makes all the difference in dining out. Hell, I know how to order beer, but one has to eat once in a while. 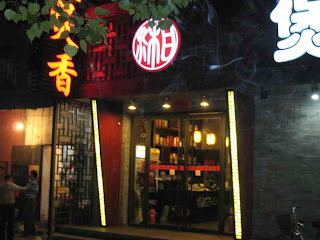